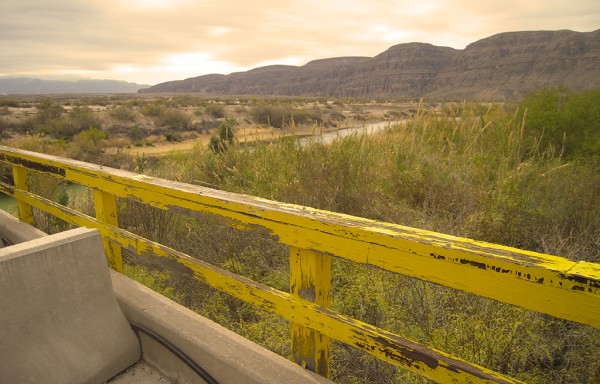 I’m not much for watching organized sports events, even when they are super. But I figured I’d do something special yesterday and take a little road trip. The end of the road found me at the old La Linda crossing on the Rio Grande, south of Marathon. The bridge is all blocked off to keep folks from crossing.

We call it the Rio Grande (grand river) and the Mexicans call it El Rio Bravo del Norte (brave river of the north). Well, it might be brave, but it damn sure ain’t grand, I can tell you that. Anywhere else it would be called a healthy creek.

There was a time when we all, Mexicans & gringos alike, traveled back and forth across it. We’d wander over to the little villages to eat and drink cold Mexican beer. The Mexicans would come over on this side to buy groceries and get medical help. We all attended bailes, pachangas, and birthday parties. They were our friends.

Lawmen had friends on the other side, too. They kept us advised of who was smuggling, who was hiding out, and who was just generally up to no good. We understood each other. We had an arrangement.

Other than the people along the River, Americans have never understood Mexico. Our country has always looked down on our neighbors to the South and treated them like ignorant step-children (hell, the bastards can’t even speak English!). All this country knows how to do is exploit them or ignore them. And now folks are just sure that Mexico is seething with terrorists and dope dealers.

I’ve never seen a terrorist in this part of the country. But, who knows, the Sierra del Carmens might just be covered up with terrorist training camps, rocket installations, and god only knows what else. I kind of doubt it, though.

Our Government, in its infinite wisdom, has put heavy restrictions on all border crossings of any kind. But, damn, they sure screwed up my neighborhood. The Mexicans out this way used to have names and faces, but now they are just “those people who live over there.”

Damn a barricaded bridge! And damn the terrorists! And double damn the fools who don’t take the time to try to understand their neighbors!!!