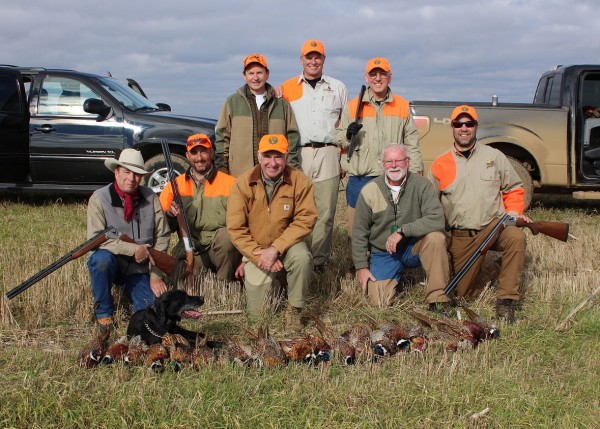 Ken Jorgensen and I made a wide swing out across the prairie and came in on a high bank above a dry creek bed. Below us, in the creek bottom, was a pretty good sized corn field. As we hid behind bushes and tried to stay motionless, we could see our fellow hunters working the corn field and heading in our direction. Phil Johnson and Randy Hansen’s dogs were working out ahead.

We could occasionally see pheasant rise up out of the corn and hear the guns pop when the bird was a rooster. Ken and I were getting tense from the excitement and the waiting. But soon, when the birds hit the end of the field by the creek, it would be our turn. And, slowly, the boys kept coming our way.

Actually, the boys got right down to the very end of the field and I was afraid that the pheasant had gotten away, or never were there in the first place. That’s when all hell broke loose!

Within the next five minutes, some 30 birds came blowing out of the last of the corn and flew right over our heads. Most of them were hens, but there were a respectable number of roosters in the bunch, too. I tell you, our shotgun barrels got warm as we shot, reloaded, and shot again. And I will tell you right now that it is none of your damn business just how many birds Ken and I missed. Some things are just better kept private.

This was the kind of pheasant hunting we got into for three days near Regent and Bismarck, North Dakota. And this was in a year when early winter storms were supposed to have decimated the Dakota pheasant crop. Well, don’t you believe it.

We were lucky to be hunting with Randy Hansen, of the Cannonball Company, an outfitting organization located in Regent, North Dakota. The same winter storm that everyone was cussing had kept the farmers out of their fields and their corn had not been harvested. And, my friends, that is where the birds were!

Altogether it was a great hunt. And what a grand way to test out the new Ruger Red Label shotgun that was just announced last week. You can quote me, it is a great shotgun and that was a grand hunt!