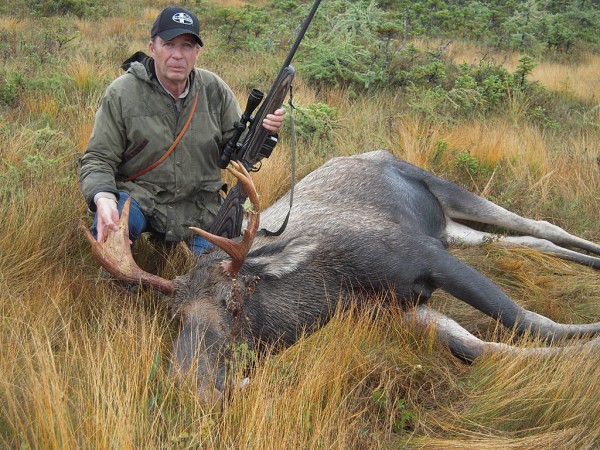 As I write this I am sitting in the Mount Peyton Outfitters lodge near Bishop’s Falls, Newfoundland. I’ve got a moose hanging in the game shed and I’m taking it easy and watching it rain. Our hunt was made possible by Mossberg Firearms and our friend Linda Powell. The disreputable gun writers on this endeavor include myself, Richard Mann, and David Draper. Do I really need to add that we’re having a ball?

Newfoundland, a large island, is the eastern-most province in Canada and was primarily settled by good Irish folks who keep their fine manners and traditions alive. The land is thick with moose, caribou, and black bear, altogether a sportsman’s paradise. Thick woods give way to open meadows that are really wet bogs. Did I mention that you really need to wear waterproof boots? And good rain gear comes in handy, too.

Yesterday, Joel Thompson, my guide, and I, were working the woods and trying to collect me a moose. Stopping in a neck of timber, Joel started giving out a cow call and we shortly heard a bull moose answering. He was clearly coming closer. When the young bull stepped out, he was a mere 15 yards away from us (did I mention that Joel is a helluva moose caller?). My Mossberg MVP Predator rifle, in .308 Winchester, was up to the task. My first shot popped the moose on the point of his right shoulder. He quickly spun and ran into the open where my second shot quartered through his body and put him on the ground.

As you can see from the photo, this moose is a long way from the Boone & Crockett #1 trophy. Not a problem, he’s a trophy for me. I’ve never hunted moose before, was thrilled to see one called in, and thoroughly enjoyed the entire experience.

Hunting is more than the shot that you make and the animal that you kill. It is also about hunting with good friends, a good camp, and great camp food. My trip to Newfoundland and the Mt. Peyton Outfitters camp, delivered it all in spades.

I’d write more, but the local radio station is playing “The Wild Colonial Boy” and I plan to sing along. God bless the fine folks in Newfoundland!