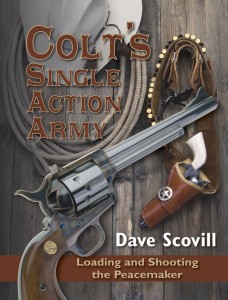 Asking Dave Scovill about Colt Single Actions is a lot like asking Chet Atkins about guitars. You’d better have brought a pen and notebook with you so you can record all the information accurately. The good news is that Dave has just published a new book on the subject, “Colt’s Single Action Army: Loading and Shooting the Peacemaker”, published by Wolfe Publishing Co.

In this new work, Scovill covers important information about the history of cartridges that the Colt was chambered for and bullet design and powders that work. In addition, you’ll find out about a number of calibers that you probably didn’t know the old Colt was offered in, like .476 Ely and .455 Colt.

Years ago, Dave gave me one of my first regular-paying writing gigs when he tagged me to do the handgun column for Handloader Magazine. That was a great and fun relationship and we’ve been friends ever since. I would point out, however, that it is difficult to work for an editor that knows more than you do. Keeps one on one’s toes, you might say.

In addition, Dave and I share an appreciation for what the late Skeeter Skelton did for the grand old .44 Special cartridge. When you get your copy of this great new book, you can read all about it. Aside from some pretty thorough Colt SAA history, this book is worth the cost just for the reloading data. Over the years, Dave Scovill has passed on little handgun & reloading tips to me that, in every case, worked out just like he said they would. I am so pleased to see Scovill share his wealth of knowledge with us in this new publication.

He’s a man who knows his Colts. But, please don’t tell him that I was bragging on him.

The Liberty Cross from Crossbreed
A few months back, we announced the introduction of the Liberty Cross holster that I had a hand in the design of. This was done at the request of the late Mark Craighead, founder of Crossbreed Holsters. This is a limited edition of a concealment holster for the Colt SAA, and its copies, all of which were numbered and signed by me.

We are pleased with the interest that has been shown in the rigs and want you to know that there are a few left. This is an excellent concealment holster for those who favor the single action and is based on the reliable Liberty holster that was originally designed by Bruce Nelson. To get one of the Liberty Cross holsters, contact Trent Cooper at Crossbreed Holsters, www.crossbreedholsters.com.