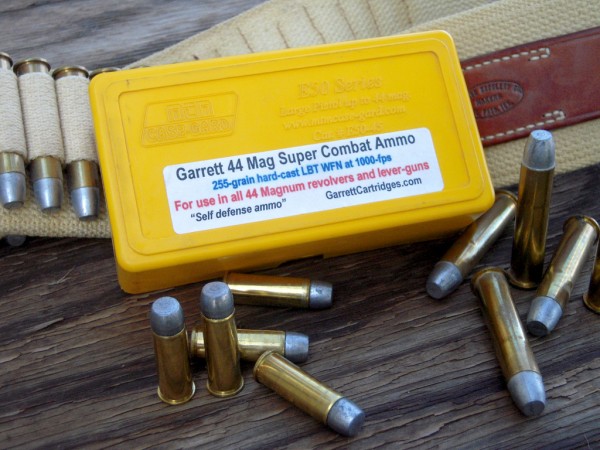 A while back I received the sad news that Randy Garrett, of Garrett Cartridges, was closing his business after some 26 years of building some of the best cast-bullet .44 Magnum and .45/70 loads that were available. The good news is that my old amigo Ashley Emerson has bought the company and moved it to Texas.

I believe that the key to the great performance and accuracy of the Garrett ammo was the result of Randy’s complete understanding of how to properly cast bullets. I can guarantee you that he didn’t spend his time melting down old used wheel weights to make his fine product. Instead, he used the recipes advocated by Veral Smith and Elmer Keith to build heavy bullets that had great accuracy, great penetration, and unmatched integrity.

I have known Ashley Emerson for more years than either one of us cares to remember. And I can assure you that Ashley hates light cartridges and inaccurate ammunition with a passion. We have hunted together and shot together on numerous occasions and I can assure you that Emerson understands cast bullet loads for big-bore cartridges. In addition, he is an honorable man. I am very pleased to see Randy Garrett’s legacy continued in the person of Ashley Emerson.

Garrett Cartridges of Texas is in operation near Weatherford, Texas, and cranking out that good ammunition. A check of the web site will reveal quite a number of loads for the .44 Magnum and the .45/70. And, I suspect that you will also see the addition of cast-bullet loads in .45 Colt and .454 Casull added in the very near future.

For a number of years, I hunted exclusively with handguns and took quite a bit of game with Garrett ammunition. Penetration and accuracy were everything that I expected and felt that I needed. Randy Garrett is an artist, and Ashley Emerson is, too. The best news is that we handgunners are the real winners.

Express Sights
Speed Holstering: Why It's a Bad Idea
It's a Border Thing