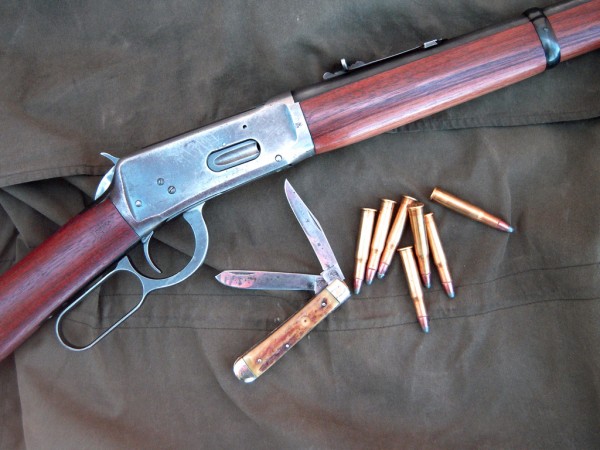 This time of year gets sort of boring for hunting folks. Short of the spring turkey season, there isn’t a lot of hunting going on. And it’s a little early to start getting rifle, ammo, and gear, in shape for the fall. Without much to do, I caught myself thinking about my early days as a deer hunter. I’m talking about those days back before their was camo clothing, long underwear that actually worked, range finders, and all those smelly scent concoctions guaranteed to bring a trophy buck on the run.

Back then, we saved our allowance to buy some rifle ammo. The sporting goods stores in Austin had what they called broken boxes of ammo. That is, you could buy individual cartridges without having to splurge on a whole box. So, first order of business, my allowance went for seven .30/30 cartridges.

In that day, a young hunter couldn’t hardly get by without the local army surplus store. The dark blue Navy P Coat was just about right for a Texas whitetail hunter, as were the surplus Korean War combat boots. Only thing else a fellow needed was a sharp pocket knife and some matches. Hell, rigged out like that, along with a pack of Camel cigarettes, and a guy was sorta the James Bond of the Texas Hill Country!

I hate to admit it now, but our bunch were sort of deer-hunting snobs. I can remember the first time one of our gang showed up with a set of binoculars that his daddy got from a German officer who didn’t need them anymore. Binoculars? What more proof did we need that the guy was an absolute sissy? We damn near voted him out of the hunting club… would have, too, except he had a car.

No, I’m not knocking all the gear that is offered to today’s hunters. I’m just cogitating on where it all started for me. I don’t use camo or all that smelly stuff. But I do like the fact that today’s clothes, underwear, and boots, will actually keep me pretty warm and comfortable. And, while I don’t use a range finder, I do have a scope on my rifle and try to keep a good set of binoculars handy.

'The Caliber Wars:' Does the Round Really Matter?
Bwana Clem
Fit A Pistol Caliber Carbine into Your Defense Plan

50 Responses to The Good Old Days?