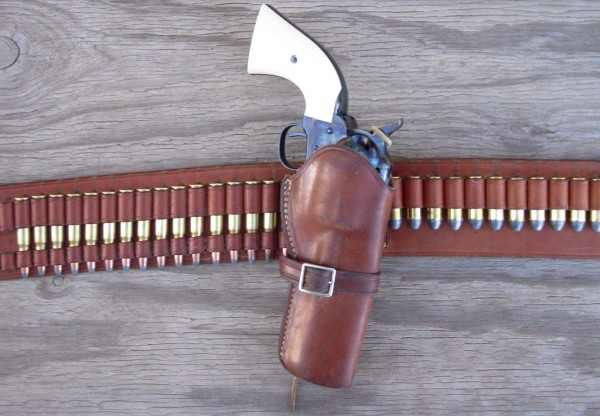 The Scout Belt is an interesting piece of equipment that has its origins in the American Southwest. The first bottleneck rifle cartridges, the .30/30 & .30/40 Krag, were introduced about 1895, along with the production of the Winchester Models 1894 & 1895 rifles. Both cartridges and rifles became the instant sweetheart of the Texas Rangers, Arizona Rangers, Mounted Customs Inspectors, and border lawmen in general.

About this same time, some enterprising soul came up with the idea of designing one cartridge belt that would hold rifle and pistol cartridges. I suspect that the first Scout Belts were manufactured by S.D. Myres, however everyone made them, and the one pictured is by El Paso Saddlery. It is 3 inches wide and holds 34 .30/30 cartridges and 12 .45 Colt cartridges. I’ve never weighed the darn thing when it is full of cartridges and Colt, but I suspect it would discourage a fellow from doing much walking. Besides, that’s what horses were made for.

Texas Rangers used the Scout Belt well into the 1900’s. They didn’t have badges until about 1935, but, wearing a Scout Belt and packing a ’95 Winchester and a Colts revolver, they probably didn’t get asked for identification very often. “Command Presence” is what I think Jeff Cooper called it.

When I was packing a badge down along the Pecos, I carried this Scout Belt, a Winchester, and a Colt’s revolver, in the trunk of my car. There were occasionally times when a fellow had to get horseback to do his job and there was still no better outfit for getting that job done. Of course, that was before the days of black plastic everything, tactical gear, and militarized law enforcement. Hell, we didn’t even know what tactical was. Some knew a fair bit about fighting, though.

Every time I get this old Scout Belt out, I am reminded that there was a time when a peace officer was a family counselor, the dog catcher, the SWAT Team, a legal adviser, and whatever the hell else needed to be done. I can’t help but think it was more fun back then.

68 Responses to The Scout Belt