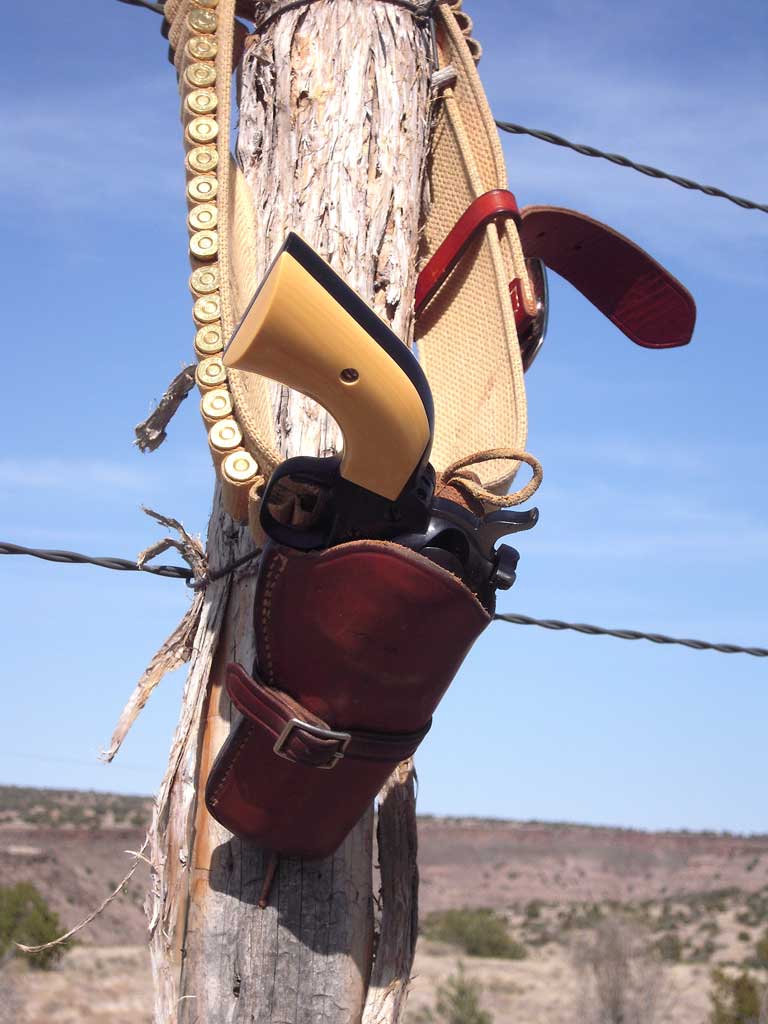 April 4, 1878—134 years ago, yesterday, a lone rider rode his mule along the Rio Tularosa, between Lincoln and Mesilla, in New Mexico Territory. The man was Andrew L. “Buckshot” Roberts and he was bent on leaving the area. The Lincoln County War had just broken out with the death, 3 days before, of John Tunstall. Roberts had been working for the other side, though it is not certain that he had anything to do with murdering Tunstall. At any rate, Roberts was leaving while the getting was good. Almost.

Riding up to Blazer’s Mill, Roberts discovered, too late, that a group of Tunstall supporters were taking their lunch at this popular stop on the trail. About a dozen Regulators, as they were called, were at the mill and had already spotted Roberts’ approach. The Regulators were headed by Dick Brewer and included such New Mexico gunmen as Charlie Bowdre, George & Frank Coe, and Henry McCarty, better known as Billy the Kid.

Not showing the white feather, Buckshot swung off his mule and shucked his Winchester as he did. Frank Coe, who had been on friendly terms with Roberts, came out to talk to Buckshot and try to get him to surrender to this questionable posse. The two men sat on the steps of one of the buildings and talked, but the talk was useless.

Tiring of the wait, Dick Brewer told some of the Regulators to go and take Roberts by force. As they came up, Roberts threw up his rifle and he and Charlie Bowdre fired at the same time. Roberts took a slug in the gut and his own bullet hit the buckle of Bowdre’s gun belt, knocking the wind out of the gunman but doing no other damage.

In a hail of bullets, Buckshot Roberts backed into a building that served as the mill’s office. Throwing down at rolled-up mattress in the doorway, Roberts picked up a .50-70 Springfield rifle to replace his empty Winchester. Gut shot and hurting, Roberts lay down behind the mattress, prepared to give as well as he got.

With bullets flying all about, Roberts noticed the gang leader, Dick Brewer, run and hide behind a nearby pile of logs. As Brewer raised up to shoot, Roberts took the top of his head off with the Springfield rifle. Mr. Brewer was what we call DRT (dead rat there!).

The death of their leader took all of the starch out of the Regulators. Nursing their various wounds, they rode off to find easier people to “arrest.” Roberts lingered for a short time before passing. He was buried at the mill site right next to Dick Brewer, on the banks of the Rio Tularosa—134 years ago, yesterday.