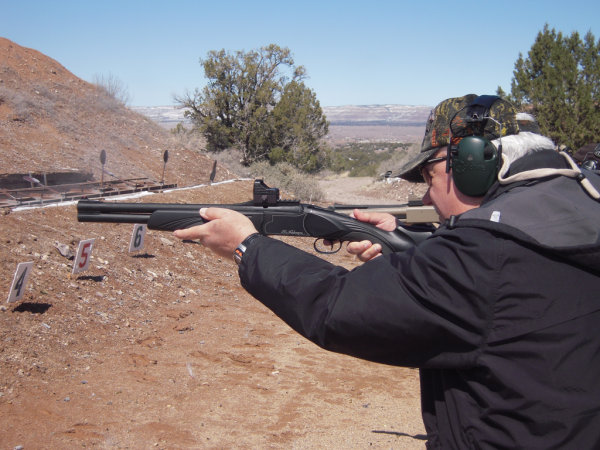 As I write this, I have just completed a writers’ seminar with Mossberg. We shot their Flex System shotguns and their ARs and had a ball. I may very well be writing about some of those in the weeks to come. But, right now, I want to tell you about the gun that was the hit of the session. It was the Mossberg Maverick Tactical Over & Under.

This shotgun comes with 18 1/2-inch barrels, an attractive matte black finish, a fiber-optic front sight, and a short tactical rail rear sight. The Maverick has a single trigger and a tang-mounted safety that allows you to select which barrel fires first. The internal hammers are cocked mechanically, instead of being inertia driven. And you can select a model with cylinder-bored barrels or one with screw-in chokes. The entire shotgun is only 36 1/2-inches long, which is about 4 inches shorter than a pump shotgun with the same barrel length.

This is a very useful shotgun for home & personal defense. Its short length, over all, makes it perfect for negotiating tight corners in the home. The barrel selector allows you to load each barrel with a different cartridge, depending upon your needs, and select which barrel you need to fire in a given situation. The Maverick is light, handy, and easy to shoot. You wouldn’t believe what we were doing with slugs at 50 and 100 yards on steel targets.

Naturally, we noticed a few things that needed changing. For instance the guns we shot had extractors instead of ejectors. We recommended that be changed so that the gun would throw the empties out and reduce reloading time. We also recommended that the tactical rail be moved from the top of the gun to the bottom of the lower barrel so that a tactical light could be mounted. Something like the XS Express sights should be on top, with a Big Dot on the front ramp.

One thing I like about working with people like the folks at Mossberg is that Linda Powell listened to our suggestions and immediately got on the phone with her boss and relayed the message. As I write this, Mossberg will be incorporating some, or all, of our suggestions into the Maverick shotgun.

We had three Gunsite instructors handling range duties for our seminar and the three of them have already ordered four of the Maverick Tactical Over & Under shotguns. That’s how cool this shotgun really is. So you might want to check it out when you get a chance. Right now, the gun is so new that you won’t find it on the Mossberg web site, but it is included in their catalog. I don’t, yet, have an MSRP on the Maverick but wouldn’t be surprised if you could buy it for around $500, maybe less.

Five Beans in the Wheel
Is Your Home a Hard Target?
Australia Bound

This entry was posted in Guns, Personal Defense, Shotguns and tagged gunsite, home defense, mossberg, over and under, shotgun, tactical. Bookmark the permalink.

25 Responses to The Mossberg Maverick