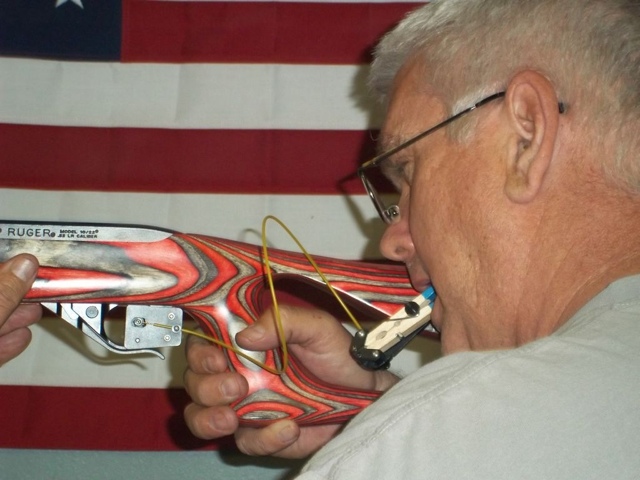 Our shooting sports family has always been more than willing to include anyone and everyone who is interested in our sport. And this has always included those who are physically challenged in one way or another. This has become especially important since we have begun to welcome home so many wounded warriors who have been injured while fighting for our freedom.

One of the greatest challenges has been meeting the needs of those who have serious problems with their hands, or have no hands at all. In the past, several companies have come up with devices that allow a person to break their shot without the use of a functioning trigger finger. Unfortunately, these devices have been difficult to install, are bulky, and rather fragile. What was needed was an established trigger company to meet the challenge. And Timney Triggers has come through in spades.

I examined the Timney Hands-Free Trigger at the recent SHOT Show and was simply impressed with it durability and simplicity of design. The unit attaches to the gun’s trigger mechanism and has a short, thin cable that ends with a clothes pin. Yep! A plain old clothes pin is used as the firing device, allowing the shooter to break the shot with his mouth. The cloths pin is replaceable, for sanitary reasons, and the whole unit can be easily switched to other firearms.

Timney Triggers expects to be ready to ship the Hands-Free trigger by this coming summer. But I know they would like hearing from shooters who are interested in such a device. You can access the Timney web page by clicking on their logo on this page.

My hat is off to John Vehr and the crew at Timney Triggers for their concern and their innovation. This is the kind of stuff that makes our industry as great as it is.

This entry was posted in Gear, Guns, Review. Bookmark the permalink.

7 Responses to Hands-Free Trigger From Timney