Man At Arms is a term that you don’t hear very often these days. Back in the old days it denoted a Master Swordsman. However, during modern times it has come to refer to a man who is proficient with firearms. Alvin York, Audie Murphy, James Butler Hickok, and Capt. Frank Hamer, were Men At Arms. 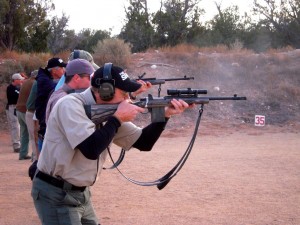 A Man At Arms will do well with just about any firearm that he picks up. He shoots smoothly, accurately, and without wasted motion or drama. He may not always win, but he will be closer to the top than the bottom of anybody’s shooting game. His guns generally aren’t gaudy and seldom have all the latest gadgets hanging off of them. They are, however, well made and well cared for. The Man At Arms respects his craft.

Interestingly enough, the Men At Arms that I know have an almost old-time sense of honor, dignity, and good manners. And they hold to those values, year in and year out, despite what condition current society might be in.

Am I a Man At Arms? That’s not for me to say. But I assure you that is what I strive for each and every time I pick up a firearm; and I handle firearms virtually every day.

Sadly, many of the current crop of gun writers don’t have a prayer of ever being recognized as Men At Arms. They can’t shoot for sour grapes; I know because I have watched them. I don’t know why they don’t get into a field for which they would be better suited.

Among the current crop of gun writers, my nominees for Man At Arms are Bart Skelton, Richard Mann, Rich Grassi, Bryce Towsley, Dick Williams, Terry Wieland, Dave Scovill, Joe Coogan, and a few others that I could name. They know what they are doing and they do it with a goodly amount of class. I am proud to call them my friends.

This entry was posted in Guns, Philosophy. Bookmark the permalink.

9 Responses to Man at Arms