Back in the mid-1960’s you could have polled American shooters as to what sort of new rifle they would like to have seen produced and I really doubt that a single shot would have even made the list. However, Bill Ruger was never known for doing what was popular at the time. Instead, Ruger created things that appealed to him and watched while they became popular with the shooting public. And so, probably without consulting anyone, Ruger announced the introduction of the #1 single-shot rifle in 1967.

Mr. Ruger very obviously studied the old Farquharson single-shot design and incorporated its strengths into this new rifle. The falling block and solid action make for a very strong rifle. Although I’m not a fan of trying to make a magnum out of every rifle caliber, the #1 action will handle all sorts of reasonable handloads and some not-so-reasonable ones, too.

There have been all sorts of models and all sorts of chamberings in the #1 over the years. However, my own favorite is the #1A, with its Schnabel for-end, and the #1H, which is a similar rifle in the heavier calibers. The first such rifle that I acquired was a #1A, in .270 Winchester. I topped it off with a 4x Leupold scope and used it to take quite a few whitetail deer, Rio Grande turkey, feral hogs, and javalina. Upon his successful graduation from high school, my son asked for it since he had killed his first deer with it. So it’s still in the family, just no longer in my gun case.

I now make do with a #1A, in 7×57, and a #1H in .375 H&H. Both rifles are topped off with the Leupold 1.5×5 scope, which I think is just about the best hunting scope I’ve ever found. And, I can’t imagine what I can’t hunt with this pair of #1’s. The 7mm is just about right for deer, pronghorn, black bear, and elk. While the .375 has been used to take nine head of Australian buffalo and, if the Red Gods are willing, it will be matched up with a cape buffalo in August, 2012.Hunting with a single shot is not for everyone, nor would I ever suggest that it is. It does, however, suit me perfectly. A light, compact, accurate rifle that is a joy to pack into the field and a pleasure to shoot. The few times that I visited with Mr. Ruger, I never thanked him for the #1. I sure should have, though. 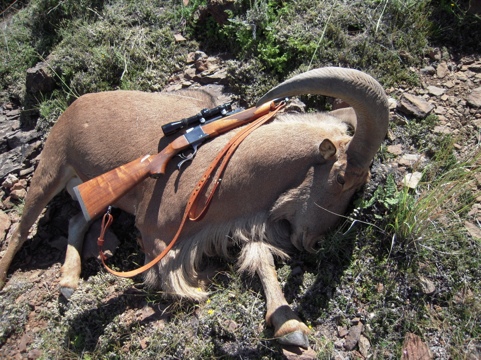 This entry was posted in Guns, Rifles. Bookmark the permalink.