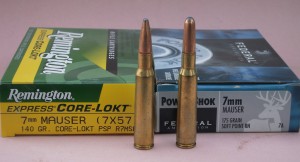 One of the world’s most useful rifle cartridges, the 7×57 Mauser, was developed by Mauser Co. of Germany in 1892. It was adopted as the Spanish military round in 1893 and soon taken up by Germany, France, and various other countries, in the ensuing years. The John Rigby Co. of England also saw its value as a sporting round and began production, calling it the .275 Rigby cartridge.

Originally, the 7×57 Mauser featured a 173 gr round-nosed, jacketed bullet that ran at about 2300fps. However, by 1913, the various military units realized that they would have a more efficient cartridge if they topped it with a 139 gr bullet at almost 2800fps.

The effectiveness of the 7×57 Mauser in the hands of the Boers caused England to redesign their .303 cartridge for more efficiency. And the US military also studied the 7×57 and used it as a model to develop the .30-06 cartridge that served us in two world wars. The 7×57 Mauser cartridge also became a favorite of sportsmen all over the world, due to its light recoil and flat trajectory. In this day and time, it is hard to believe but W.D.M. “Karamojo” Bell killed most of his 1,100 elephants with the cartridge. Bell used the 173 gr FMJ load and perfected the brain shot. The rest of us find the 7×57 Mauser to be just right for deer, the various antelope species, black bear, and elk. One of the toughest critters, pound for pound, is the aoudad sheep, yet I’ve found that they go right down when a 139gr 7×57 bullet is properly placed.

For some reason, the 7×57 Mauser has never been quite as popular with American sportsmen as it deserves to be. Only a few US companies chamber a rifle in this grand old caliber, although it is still one of the most popular calibers among those who have custom rifles built. One day, it will probably go the way of the 16 gauge shotgun and the .41 Magnum revolver. For all that, the 7×57 Mauser is truly a rifleman’s cartridge.

5 Responses to Classic Cartridges: The 7×57 Mauser