If any handgun cartridge deserves to be called a classic it is the .45 Colt. This round was developed by Colt Firearms and the Union Metallic Cartridge Co. 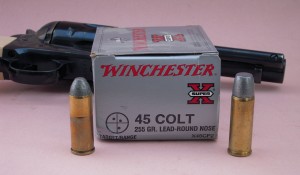 about 1872. They did this in conjunction with Colt’s work on the Single Action Army revolver that was being touted to the U.S. Army. The pistol and cartridge were accepted by the Army in 1873 and was their official weapon for the next 19 years.

Some people refer to the .45 Colt cartridge as the .45 Long Colt. I think that this occurred because Smith & Wesson also produced an army revolver in .45 Caliber. The .45 Schofield was, however, a shorter cartridge case. Ultimately, the Army used the .45 Schofield in both guns, giving way to one being called .45 Short and the other .45 Long. I do, however, have a box of .45 blank loads, manufactured by Colt, and the box is marked “.45 Long Colt.”

In it’s early black powder loading, the .45 Colt featured a 255 gr lead bullet and 40 grains of black powder. Out of the old 7 1/2” barreled Colt sixgun, this round would deliver nearly 1,000fps. In fact, the .45 Colt cartridge was the most powerful handgun cartridge until the advent of the .357 Magnum, in 1935.

Once smokeless powder came onto the scene, the .45 Colt was reduced to a velocity of some 850fps. This is still a powerful and useful loading. However, handloaders improved the round by adding a semi-wadcutter bullet and, by judicious selection of powders, safely increased the velocity to about 950fps.

Once heavier revolvers came onto the scene, such as the Ruger Blackhawk, handloaders found that they could run 250-300 grain bullets as fast as 1300fps, using such powders as H110 and W296. In this form the .45 Colt became quite a handgun hunting round. Since those days it has taken all of the game animals on the North American continent and many big African trophies. My friend, Ross Seyfried, has even taken cape buffalo with a custom Ruger in .45 Colt.

The .45 Colt is simply a great old cartridge that will not die out in our lifetime. Who among us can pick up a single action in that caliber and not think of Wyatt Earp, Frank Hamer, Gen. George Patton, and many others, who shaped the backbone of this country in the mist of pistol smoke?

3 Responses to Classic Cartridges: The .45 Colt