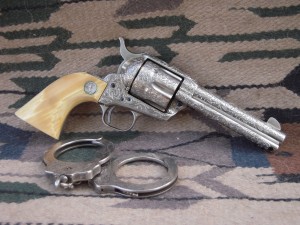 One of the topics that we didn’t get into during our recent filming in Tombstone was the issue of the Buntline Special. This was allegedly a .45 Colt single action with a 12-inch barrel that was claimed to be Wyatt Earp’s favorite weapon.

In Wyatt Earp: Frontier Marshal, Stuart N. Lake told how Ned Buntline presented five such revolvers to Kansas lawmen in the 1870’s. Those men were Wyatt Earp, Neal Bassett, Charlie Brown, Bill Tilghman, and Bat Masterson. Lake quotes Wyatt Earp as saying it was the gun that he favored during the rest of his time on the frontier. And Lake goes on to say that Earp’s gun was lost in Alaska during the gold rush.

The trouble with this story is that Colt does not have any record of these guns ever being made. None of the other four lawmen ever mentioned having one, even though Masterson became a sports writer in his later years and occasionally wrote stuff about his frontier experiences. In fact, the Buntline Special is not mentioned anywhere in frontier history except for Lake’s writing.

Lake, of course, claimed to have gotten Earp’s life story straight from the horse’s mouth. However, in later years, Stuart Lake admitted that he got very little of the story directly from Wyatt. He said that Wyatt seemed very reluctant to talk to him.

Finally, we know that Wyatt liked to conceal his pistol when he was in Tombstone. He didn’t wear a gunbelt while in town. So that means he probably carried his weapon in his waistband, or in a pocket. Can you imagine trying to conceal a Colt Single Action with a 12-inch barrel?

The Buntline Special is one of the Wyatt Earp legends that simply won’t die. A few historians still believe that he had one. However, until someone comes up with more substantial evidence to support the claim, I’ll stay one of the doubters.

Revolvers: A Favorite...
Open Letter to the Board of Directors at Colt Firearms

9 Responses to The Buntline Special