Tribute to a Hunting Buddy

My friend, Dr. Dean Taylor, passed away last week. I first met Dean a few years ago when he was taking a Gunsite rifle class with Il Ling New, his favorite instructor. In his professional life, Dean was a cardiologist of some repute, being associated with John Hopkins University. All of that, however, was just a way to support his hunting habit.

Dean had numerous health problems. I mean, serious health problems, like organ transplants and all sorts of other issues. In addition, he was a bit unsteady on his feet and couldn’t walk very far. He had wanted to hunt Africa but his doctor simply told him that his immune system wouldn’t stand it. Instead, he settled on Australia.

Dr. Taylor, Il Ling New, and I, hunted buffalo in Australia’s Northern Territory in 2009 and 2010. Our outfitter, Simon Kyle-Little (www.australianbiggamesafaris.com) worked out a way to help Dean get through the brush and on target. With our little hunting team, Dean got several great buffalo trophies on those two hunts.

The most amazing thing about Dr. Taylor was that he would refuse to take any pain medication when he planned to go out and hunt. “You don’t need to be taking any sort of drugs if you’re going to have a loaded gun in your hands,” he would tell us. Several times, I’d come in to camp and want to whine about how tired I was, and how I’d twisted my ankle, or how something else had caused me a little inconvenience. Then I’d look over at Dean and imagine what he must be going through just to be able to hunt. There was a lesson their and he served as an example to all of us.

Dr. Dean Taylor was a great conversationalist. He was great fun to share a hunting camp with. He was my friend. 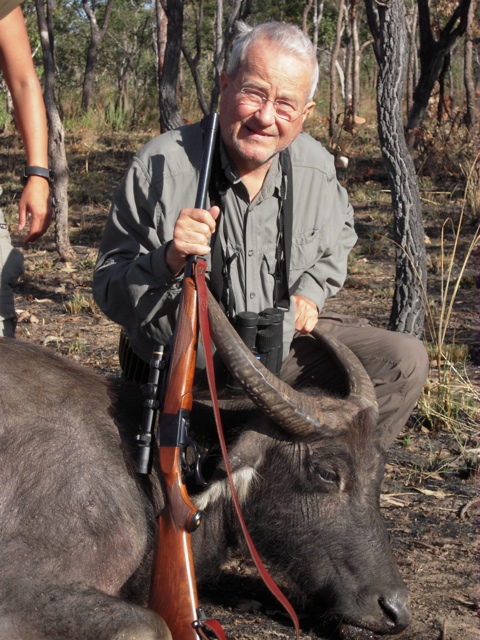 This entry was posted in Adventures, Hunting, News. Bookmark the permalink.

2 Responses to Tribute to a Hunting Buddy