While most people think of the gunfight at the OK Corral when you talk about Arizona gunfights, one other comes to mind that is a classic piece of Old West history. This one happened in Holbrook, Arizona Territory, on September 4, 1887. The sheriff involved had the unusual name of Commodore Perry Owens.

In the midst of the Graham/Tewksbury feud, Owens was given a warrant for the arrest of one Andy Cooper for killing two sheepmen. Owens went to Cooper’s home, in Holbrook, armed with his warrant and a Winchester Model 1886 rifle, in .45/70 caliber. 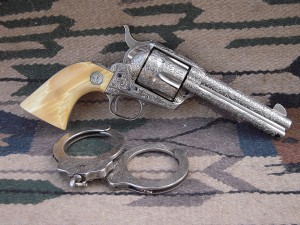 Sheriff Owens stepped up on the front porch and knocked on the door. Cooper opened the door, figured out what was going on, and popped a pistol shot at the lawman. Cooper died from a .45/70 slug before he could fire another round.

Just then, John Blevins opened a side door to the porch and blazed away at Owens. He, too, went down with one shot from the sheriff’s Winchester.

Hearing a noise at the side of the house, Sheriff Owens jumped off the porch and ran around the corner just in time to see Mose Roberts crawling out a window, gun in hand. One more shot from the .45/70, one more dead outlaw. Almost immediately, Sam Houston Blevins ran out on the front porch with a sixgun. He, too, died at the muzzle of Owen’s deadly Winchester. Finished with his business, Sheriff Owens saddled up to return home, leaving the rest of the work to the undertakers.

The sheriff with the funny name had taken out four armed men with just four shots, and he used a big-bore Winchester rifle at pistol fighting ranges.

7 Responses to An Arizona Gunfight