We could talk all day about what constitutes an accurate rifle. Some would immediately mention the importance of a good barrel, others the need for a properly fitted stock, and even others would point out the role that good sights play. However, I think we can all agree that a good trigger is critical to breaking that well-aimed shot.

Unfortunately, lawyers have pretty well taken over the firearms industry. And they all seem to agree that shooters can’t really be trusted. So they have to protect us from ourselves. One of the ways that they do this is to see that rifles generally come with atrocious triggers and that this will, somehow, keep us all from letting off those “accidental shots” that tend to get everyone sued. However, the simple fact is that you can never do really accurate work with the kind of heavy, mushy triggers that come on too many of today’s sporting rifles. Fortunately, there is hope and a solution to those terrible triggers.

Timney Triggers, of Arizona, has been in business since 1946, making replacement triggers for most sporting rifles. My friend John Vehr bought the company a few years ago and has continued to produce the kind of triggers that Timney is famous for while streamlining the production techniques. Today, Timney triggers are built on the latest CNC machinery, while the whole operation is overseen by people who know and shoot good rifles.

This week, Richard Mann, Sammy Reese, and I, are at Gunsite, attending a Timney-sponsored rifle class. And, running through the various Gunsite rifle drills, the importance of a good trigger becomes even more obvious.

In planning for the event, I ordered a left-handed Ruger Model 77 Hawkeye rifle, in .30/06, and topped it with a Leupold 1-4X scope. Now, to be perfectly honest the factory trigger on the Ruger was not all that bad. I certainly could have hunted with this rifle just as it came out of the box. But, the installation of the Timney trigger was really icing on the cake.

Col. Jeff Cooper often said that a good rifle trigger should break like a glass rod and the Timney trigger does exactly that. When you have your sights properly lined up, and start your trigger squeeze, the Timney trigger breaks clean and crisp, with no drag, no mushiness, and no over travel.

So, while many things go into the making of an accurate rifle, a light, clean-breaking trigger is certainly high on the list.

I’m having fun at Gunsite with my friends. I hope you are burning powder and enjoying your day as well. 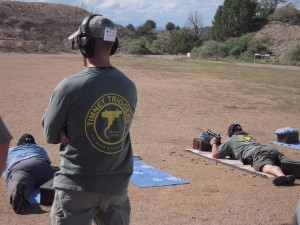