Let’s Hear It for the Hawgs! 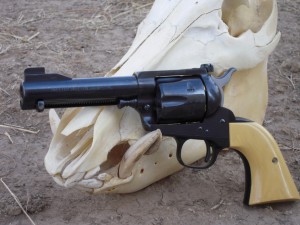 Feral pigs have been in the news lately. Just last week there was a news report that discussed the feral hog problem in the state of New York. Well, I’m really not surprised. Years ago, an old friend told me that when it comes to feral hogs there are two kinds of states, the states that have them and the states that are going to get them.

Farmers and ranchers consider feral hogs extremely destructive. But hunters should see them as extremely good sport. Hogs can be hunted day or night, in most states, and folks use everything from handguns, to deer rifles, to bows & arrows. There’re even some hardy souls who hunt them with dogs and run in and stab them with a knife or spear. Hogs are wary enough to make them a good challenge for the hunter. In addition, they are tough enough that hog hunting is a great way to test out your caliber and load for black bear and elk hunting.

I’ve never been hurt by a wild animal, but I’ve come close twice. Both times it was with feral hogs.

Some years ago, I was guiding some hog hunters down in the Texas hill country. We had a full moon, so I was putting the hunters out in deer stands just about sundown. I dropped one pair off at a blind and then skirted a canyon header to deliver another pair of hunters to their stand. About the time I dropped the second pair off, I heard a shot from the direction of the first group. I figured that going around that header had spooked a hog up out of the canyon.

Arriving back at the first stand, I found my two hunters standing in front of the blind, rifles at ready. Their story was that a big hog had come out of the canyon right after I left them off. The shooter said he had shot him right behind the shoulder with his .270 and the hog had run back into the canyon.

Looking around on the ground, I found a good bit of lung blood and, sure enough, it trailed right back down into that dark canyon. On the other hand, it had been quite a few minutes since their shot so the hog surely had to be nearby, and dead.

Leaving my hunters on the canyon rim, I unholstered my Ruger Blackhawk .357 and eased down into the brush to take it look. The first thing I noticed was that it was awfully dark and the second was that the cedars were mighty thick. Getting down on my hands and knees, I started looking for the dead hog.

In the dark, I crawled past what looked like a big log and was doing just fine until that log tried to eat me! Fortunately, things were sorted out before I needed band aids and I began to haul the (now) dead hog up to the rim. My two hunters were standing up there with big grins on their faces having a good laugh.

“Oh, Sheriff,” they snickered, “we weren’t laughing at you. We’d just never heard a single-action sixgun go full automatic before!”

Stick ’em with a knife? No, I don’t think I’ll push my luck, thank you.

Charlie Miller: A Texas Original
A Single-Action Classic
Return of the Red Label

One Response to Let’s Hear It for the Hawgs!