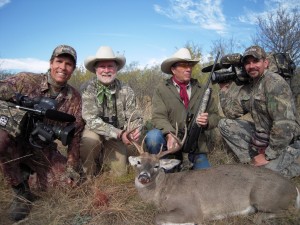 For a large majority of American hunters, the whitetail deer is the first big-game animal they ever hunted. It’s also the most common. Currently, it is estimated that there are approximately 25 million whitetail deer in North America, and they are hunted, annually, by some 11 million hunters.

Growing up in Texas, I began hunting whitetails while in my early teens. At that time, there were about 2.5 million deer in the state. However, with the eradication of the screwworm and development of improved game management, that figure has increased to between 4 and 5 million whitetails that make the Lone Star State their home.

For all that, deer hunting still provides a thrill that only another deer hunter can understand. There is the crisp fall morning, the flash of a tan hide through the brush, the sound of your safety going off and the silent prayer to the gods, “Please don’t let me screw this up!” It gets in your blood.

Read the rest of the article at American Hunter.

10 Responses to Hunting with Joe Coogan & “Benelli on Assignment”