Dove Season: A Blessing and A Curse 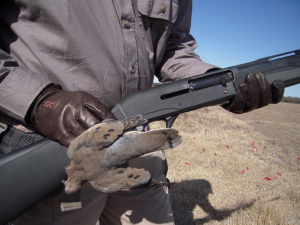 For most of us, the indication that summer is actually over is the opening of dove season. It’s always sort of an indicator of a new beginning and the promise of the hunting season that is ahead of us. Unfortunately, those pesky dove are also a great equalizer and do a darn good job of teaching us humility, all over again. Oh yeah, it’s been over a year and we’ve forgotten all the stupid shots that we tried and the glorious misses that we made during last year’s season. We swear that we’ll pay close attention to our swing and follow-through this time around. And we promise ourselves that we’ll come in well under the national average, which is something like four shots for every dove in the bag. Well, here are a few things to consider between now and Opening Day.

You’ve still got time to get out to the shooting range and burn some ammo at the skeet houses. Sporting Clays is also a good way to tune up but I prefer shooting skeet. Working your way around the skeet stations gives you consistent angles to deal with and successful dove shooting is all about judging angles of flight. Instead of having your gun mounted when you call for your bird, try holding it at low-ready, or some other field position. You won’t bust as many clay birds, but your practice will be much more realistic.

Probably the greatest mistake that shotgunners make is stopping the swing. I know that it’s certainly my biggest failing. You are on the bird and doing a pretty good job of tracking him when, just as you pull the trigger, you stop your swing. This could be caused by lack of practice and it could be due to fatigue. Either way, make yourself swing completely through the target. A good rule to remember on passing birds is BUTT-BELLY-BEAK-BANG.

Finally, you should remember that dove are easy to kill, they’re just hard to hit. This means that you certainly don’t need to be pounding yourself with high-velocity loads. 2-3 pellets in the body of a dove will kill it. I started killing a lot more dove when I switched to guns with Cylinder or Improved Cylinder bores and gentle cartridges. In 12 gauge a 1-ounce target load of 7 1/2’s or 8’s will do quite nicely. In 20 gauge make it a light 7/8-ounce load. And, in 28 gauge the 3/4-ounce load will do the job. These target loads will kill a limit of dove in no time and they won’t mistreat you, and cause you to start flinching, while you’re doing it.

Next time we’ll talk about some field tactics that will help you bag that limit of those pesky, dodging and darting rascals.

The Old Meets The New
Gunsite
Return of the Red Label