SMITH & WESSON… The day before the 2010 SHOT Show opened in Las Vegas was a shooting day for gun writers and industry folks. One of the events that I always like to visit is put on by the good folks at Smith & Wesson. I had a good time there and, as I was about to leave, they pointed out that I hadn’t drawn for my door prize. Now I have as much luck at drawings as President Obama will in carrying Arizona the next election. But, I drew anyway.

Just to prove that a blind sow can occasionally find an acorn, I actually won an M&P auto. It was supposed to be an M&P .45 but, at my request, they swapped it for the 9mm version. Don’t get excited… I’m not switching calibers this late in the game. However, the fact was that I didn’t have a good 9mm to use in classes and ammo tests. Smith & Wesson was happy to fix me up. 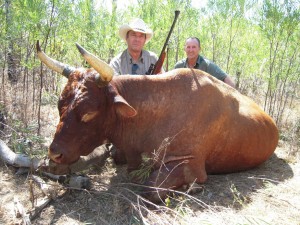 JIm and Simon Kyle-Liittle With a Prized Australian Wild Ox

As you know, there are several good polymer, striker-fired pistols available today. I just happen to like the S&W M&P a little better than the others. The model that I received has the ambidextrous thumb safeties, which I like, and I really like the interchangeable backstraps for making the gun fit my hand.

This past week, this particular M&P went off to XS Sights (www.xssights.com) to have an Express rear sight and a Big Dot front sight installed. I’m looking forward to playing with this package. Don’t be surprised if you see if on AMERICAN GUARDIAN TV during the coming season.

RUGER… This past week, I spent three days with the good folks from Ruger. I was especially pleased to tour their Prescott, AZ, plant. Mark Lang and the guys are doing some really interesting new things with the way they are set up to build guns. Mark and his staff are finding ways to make the whole process faster and more dependable.

For example, just a while back, Texas governor Rick Perry used a Ruger LCP to dispatch a coyote that was after his dog (one shot, too, by the way!). The folks at Ruger heard about the episode and within a few days were turning out an LCP marked “Coyote Special” complete with the Texas star on the slide. Their new manufacturing techniques are the reason that they can get such a quick turn-around on products. You can expect more of this to occur in the future.

We also shot several Ruger guns that will be coming out later this year. Frankly, I agreed not to talk about the specifics until Ruger gives us the green light to do so. You have to understand that Ruger is a public company and, in order to avoid accusations of insider trading, they take confidentiality very seriously. Ruger is also committed to having plenty of guns on the shelves, ready to ship, before they make an announcement. This hasn’t always been the case with Ruger and they don’t want it to happen again. So, stay tuned and we’ll let you know about some very interesting new Rugers just as soon as we can.

HUNTING… In July I’ll be going to Argentina with Remington for a dove/pigeon/duck shoot. I’ve been wanting to get among the Argentine doves & pigeons for many years and this will be my first opportunity. Down there, the birds nest several times a year and there are so many that they have become a pest to local farmers. I’m told that it’s not uncommon to shoot 500-1,000 shotgun shells each day! And, not to worry, the birds are collected and provided to villagers for food.

And then, in August, Il Ling New, Dr. Dean Taylor, and I will be back in Australia, hunting Asian buffalo with Simon Kyle-Little (www.australianbiggamesafaris.com). We’re heading back to the Walker River camp, in Eastern Arnhem Land, and will be doing another buffalo management hunt. 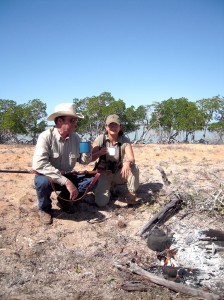 This year, I’ll be hunting with the same Ruger #1 (.375 H&H) that I used last year. But I’ll be using the Hornady Dangerous Game 300 gr. soft-point ammo this time. As with last year, I’ll give you a blow-by-blow of the hunt and let you know how the ammo performed.

MUSIC… Jim Jones is producing a new album for me. This next week I’ll head to Albuquerque and record the last songs for it. Then we’ll be involved in mixing the completed work and getting it ready for distribution. With my hunting trips and all, I expect we’ll probably have it ready to ship some time in October. Just a guess, though. Our main goal is to get it right and have a collection of songs that you folks will enjoy.

I hope that each of you has a fun, exciting summer. Feel free to drop me a line and tell me about your latest hunt or your newest gun. I’ll get back to you in August, with a report on Argentina and Australia. In the meantime, ya’ll try to behave yourselves!!!

This entry was posted in Adventures, Guns, Music, News. Bookmark the permalink.